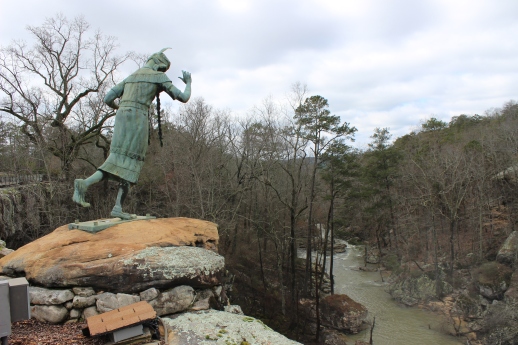 GADSDEN, AL | March 9, 2016 | Nestled in the city of Gadsden, Alabama, at the top of a 90-foot waterfall, a faded bronze statue of an Indian princess stands, posed to jump to her death.

This is Noccalula Falls Park.

According to Tarrance, Princess Noccalula was the daughter of an Indian Cherokee tribe chief. The Cherokee tribe once lived in the area that is now Gadsden. Tarrance said that Noccalula’s father promised her to a member of the Creek Indian tribe in exchange for peace.

Although Noccalula was in love with someone from her own tribe, she still went through with the wedding plans. The food was prepared, the guests were ready and Noccalula even put on her dress.

“But instead of walking down the aisle, she went over the falls,” Tarrance says. “To me, it’s just really sad but at the same time, she died for love. She believed in and wanted her own thing and unfortunately took her own life.”

Tarrance works in the Kiwanis Pavilion near the main entrance of the park. The window in her office faces a spacious playground surrounded by chain-link fences. Bright neon plastic slides and houses fill the scene. Faint shouts, shrieks, and bursts of laughter can be heard from inside the office.

Only a few yards to the left of the playground is the waterfall. The statue and running water are fenced off for visitors’ safety. The water flows into a deep gorge surrounded by caves, accessible to guests via a trail.

Tarrance adds that while most people come to Noccalula Falls Park to see the statue and learn the legend, the park is so much more than just a waterfall. There are also walking trails, a miniature train, pioneer cabins, a petting zoo, and even a caged lion. But above all, there’s a sense of community.

Ellen Dunn, a train driver for the park, gets especially excited when talking about the park’s lion during an afternoon ride.

“That’s Sheila,” Dunn exclaims, pulling the train to a stop, its motor rumbling quietly. She points to a golden lion perched inside a double chain-link fence. “We’ve had her for 12 years.”

Dunn tells me she’s lived in the Gadsden area all her life. She began working for the park six years ago.

“The area is so beautiful, you can almost see the history when you think about what’s going on,” Dunn says.

Dunn says that one of her favorite parts about her job is seeing the children’s faces light up when they ride the train during the Christmas season.

“The area is so beautiful, you can almost see the history when you think about what’s going on,” Dunn says.

Dunn explains that one of her favorite parts about her job is seeing the children’s faces light up when they ride the train during the Christmas season.

Christmas At The Falls is the park’s most popular event. This event typically starts in November and offers everything from a Santa workshop to a Christmas-themed gift store to a cookie-decorating station. And, of course, the lights.

“We start putting up lights in September all the way up until Thanksgiving Day,” Tarrance says. “And even after that is over we’re still like, ‘Oh we see a dead spot, we need to put lights there.’”

Tarrance says that when people ask what company she uses to decorate the park, they are surprised to learn that the park staff handles events themselves. There are about 20 to 25 staff members who decorate.

“We all love our jobs,” Tarrance says of her staff. “Our little slogan is, ‘We work hard so you can play.’”

Not all events are as heavily planned as Christmas At The Falls. Tarrance spends the morning of the interview helping prepare the Kiwanis gazebo for a last minute Arbor Day event. According to Tarrance, she and her staff were told about the event just one week before.

People begin trickling into the gazebo around noon for Arbor Day. They form lines along the right side of a long row of wooden benches. Park staff members stand on the left side, giving out tree saplings to these guests. Tarrance says that the tree offerings include bald cypress, crepe myrtle, and river birch.

The smell of barbecue wafts into the gazebo as someone grills nearby. A mother and her two daughters greet people by a makeshift stand, selling Girl Scout cookies near the entrance. A light breeze rustles the leaves of the park’s trees and bushes. And in the distance, people stand by the statue of Princess Noccalula, leaning over the guardrail slightly to read the plaque that tells her story.

A local resident, Brianna Lowe, eventually approaches Dunn at the end of the line. Lowe holds her young daughter, Vivien, as Dunn hands them a few saplings. Another staff member leans in to tell Lowe that the trees are each one-year-old today.

“Vivien is one today,” Lowe replies with a smile. “That’s kind of one of the reasons we came, to get a tree to plant on her birthday. They’ll [the saplings] be the same age as her!”

Like Tarrance said earlier, there is so much more to the park than the waterfall. Princess Noccalula’s story may draw in tourists, but small events like Arbor Day bring in the local community.

Noccalula Falls Park is more than meets the eye. For one-year-old Vivien Lowe, it is where her mother found the tree that will grow up with her. It is a place where memories are made.